The Moon is particularly beautiful around this time of the year (or around August 15th of the traditional Japanese solar calendar), and is called 中秋の名月 (chūshū no meigetsu), or mid autumn harvest moon, in Japan. From ancient times Japanese people enjoyed お月見 (otsukimi), or moon viewing, to celebrate and enjoy the beauty of the moon, and also to wish for a good harvest by displaying seasonal crops such as rice, beans, and sweet potatoes.

Have you ever looked into the markings on the surface of the moon? Sometimes you can observe interesting patters such as a crab with one claw, an alligator, side face of a woman, and a rabbit, which is probably the the most well known one among the Japanese culture.

There is also a folklore that explains why the rabbit is on the Moon. Although the plot varies depending the country and region, the story goes something like this:

There were a monkey, a fox, and a rabbit living together in a mountain. One day they found a starving old man begging for food, and they decided to help him. The monkey collected all the fruits and nuts grown on the trees, and the fox caught fish from the river and provided them to the old man. The rabbit, who could not gather anything, was ashamed and instead offered hid own body by throwing himself into a fire the old man had built. The next moment the old man relieved his true identity as 帝釈天 (Taishakuten), one of the Buddhism gods, and saved him from the fire and brought him up to the Moon so that his courage and virtue will forever be praised. This is why it is believed that there is a rabbit on the Moon. 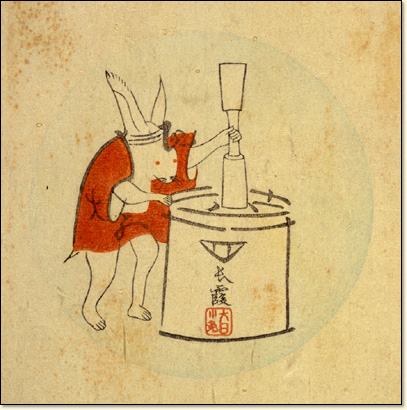 I am not quite sure since when the rabbit started pounding mochi, though. Maybe he decided to make some mochi for the god to show his gratitude? 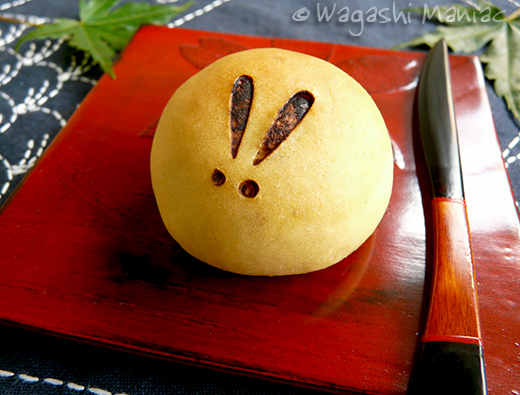 Also during the Moon viewing season, you can find various Wagashi, or traditional Japanese sweets, that looks like rabbit. They are so adorable and often too cute to eat.

Next full moon is November 7th. You may be able to see the rabbit pounding mochi 🙂