Our Kickstarter campaign ended successfully on July 20th. Beginning on the morning of July 21st we began the first phase of the process: defining the user experience of the app. Of course we had spent considerable time working through version of the UX during concepting, and we had plenty of ideas at the ready, but on the 21st it was time to get serious and define a path forward, both for our development partner Super Toy Box and in response to the excellent comments and suggestions we collected over the last couple of months.

I’m glad to report we’ve got the whole app defined just about where we want it. All told its about 45 pages of user-flows, wireframes, and navigational concepts. We’re going to collaborate with Super Toy Box over the next couple of weeks to tweak and enhance the overall design, but we’ve got a great start.

I thought I would share a couple of screens to illustrate a little bit of behind the scenes documentation. We don’t want to give away too much, we always want to save some surprised for the first time you open the app, but getting the big ideas down into executable code is a important part of the process, and during the discussion in the comments below, let’s talk a little further about some of the details. 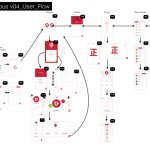 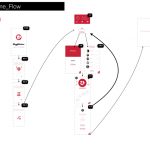 Jumping into the game 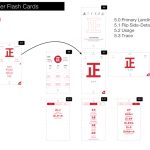